Waking up Friday morning, I asked Johnny, “Where can we go?” It’s supposed to be so beautiful this coming weekend, so we decided on a “Blakation” as the boating community calls a trip over to Blake Island.

We pulled into the marina and two bald eagles greeted us in a tree close to shore. 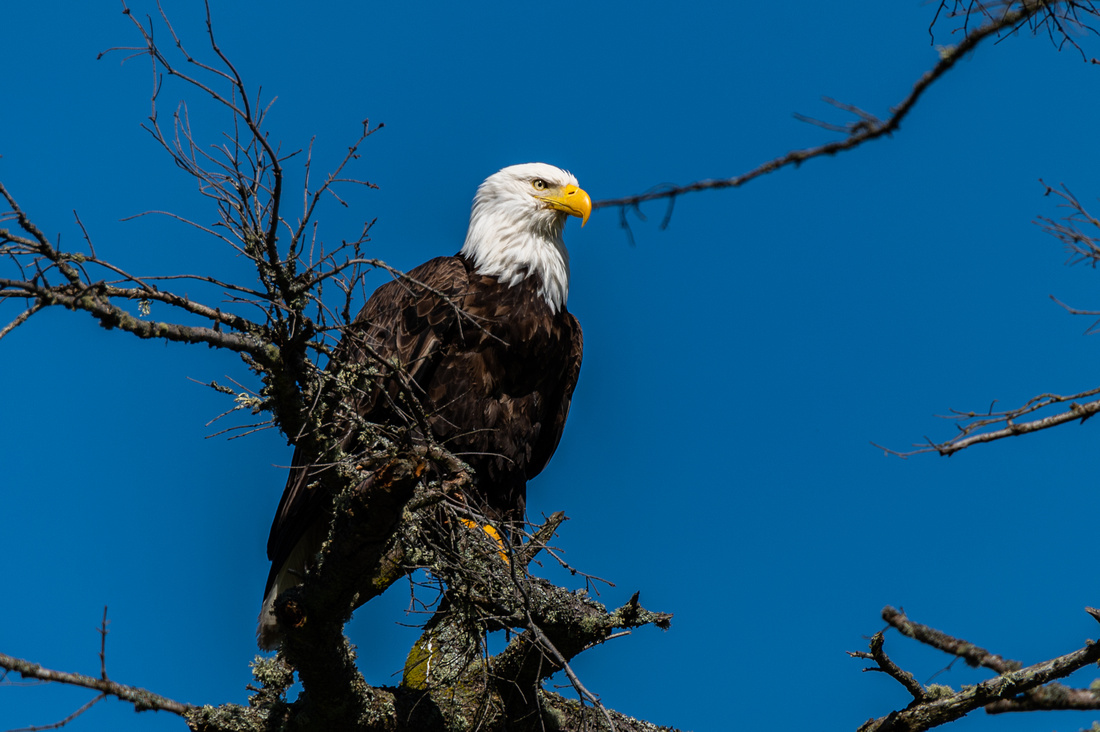 The deer were grazing, the Canada geese were honking, kids were playing and running around while the adults looked on. Some folks had grabbed dock carts and were hauling their camping gear out to the campsites and Mount Rainier (Tahoma) stood in her place at the end of Puget Sound. Friendly boaters were helping the newcomers by catching lines as they came in. The iconic Washington State Ferries were busy on their routes to the north and to the south of the island. Container ships were anchored out in view, waiting their turn to be unloaded in Seattle.

It’s winter in Seattle, but the sun was out. The blue skies and puffy white clouds filled our windless view.

I found a huge sunbeam on “Our Dance’s” party deck, as we call it. Relaxing and reading was about all I had on my to do list this day.

As the sun was setting, the sky came alive with purples and pinks. The docks had quieted down as most people were serving up dinner. I walked out to the beach to photograph the skies over the Seattle skyline. Turning to the south, the majestic Mount Rainier was draped with the colors of the sunset and the Vashon ferry was running its route, right in front of the mountain. I just stood there for a moment saying to myself, “We live in an amazing place.” 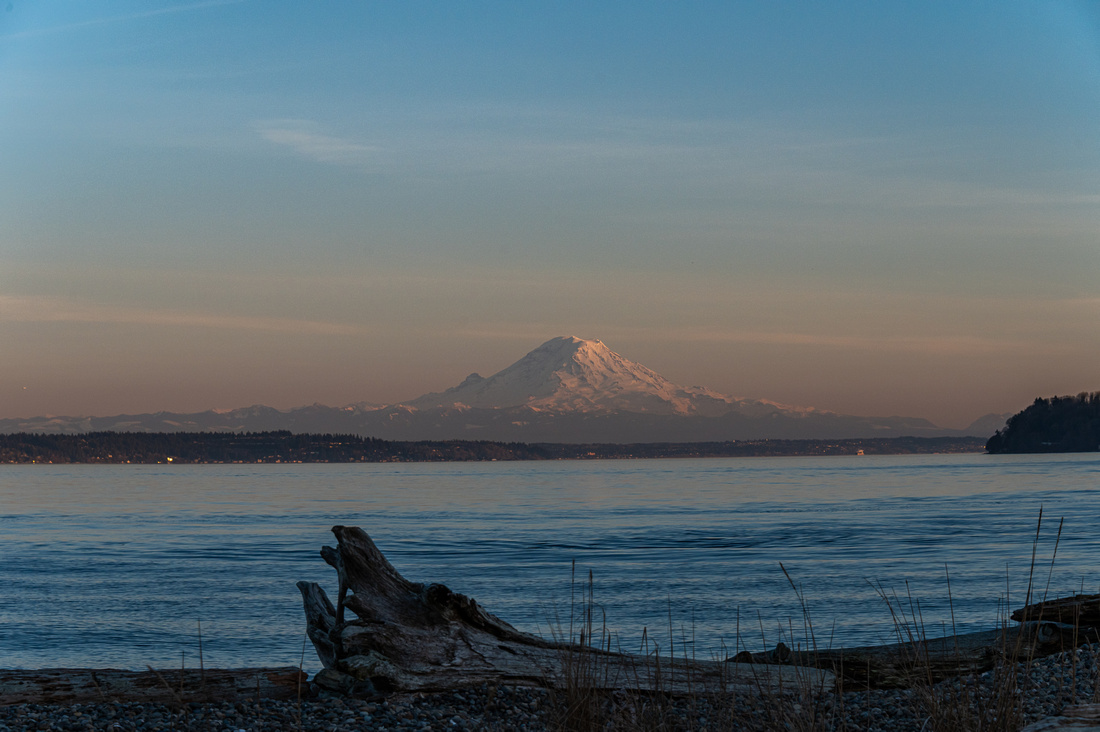 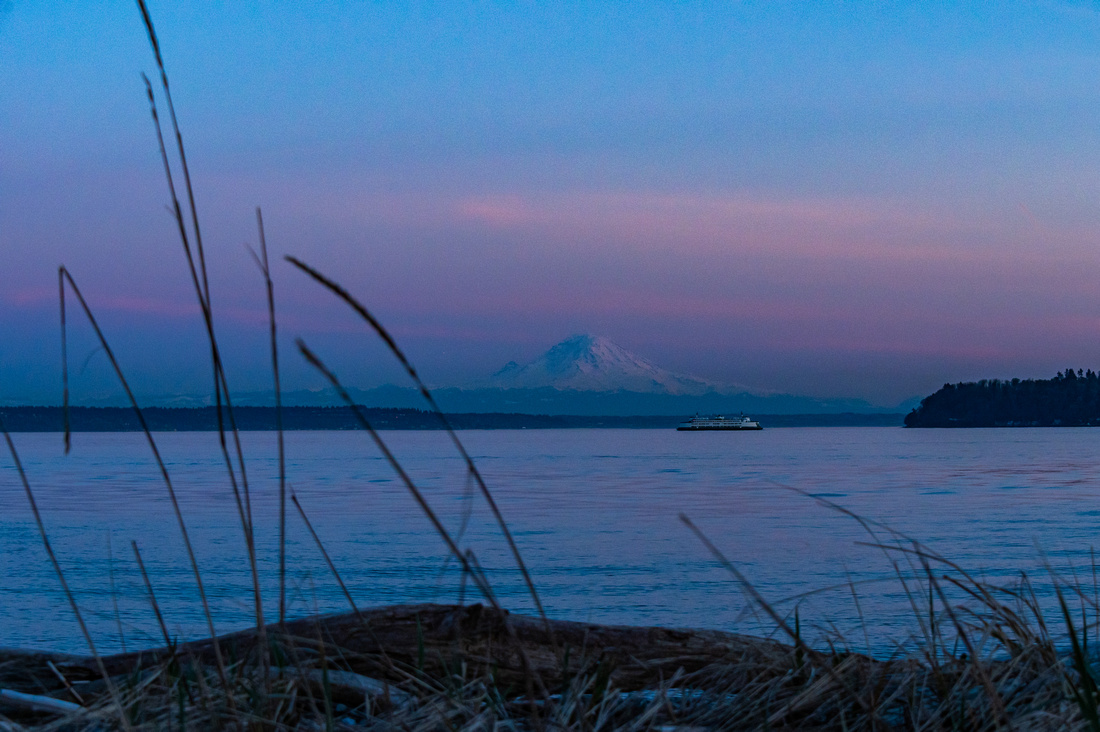 I turned back toward Seattle. The pinks and purples had disappeared, but what was appearing right before me was BLUE! Blue everywhere! The sky, the water, everything. It felt like it had enveloped me too! I do love the blue hour when everything seems to change into the most calming and peaceful color.

Johnny was manning the BBQ and grilling up fish and veggies for dinner. We happily enjoyed our meal next to our propane fire on the party deck. Soon the cards came out for a “friendly” game that I lost terribly!!!

I almost woke too late the next morning as the sky was already filling with color! Pinks, purples, oranges! It was crazy cold and about 36 degrees. The main dock was extremely slippery with frost. I carefully managed my way across and headed to the beach to find some interesting compositions for the sunrise. I was hoping to include Mount Rainier, too! With all the driftwood, the gorgeous trees, tall grasses, rocks, sand and shells definitely made my composition hunting pretty easy! It was just a spectacular morning. 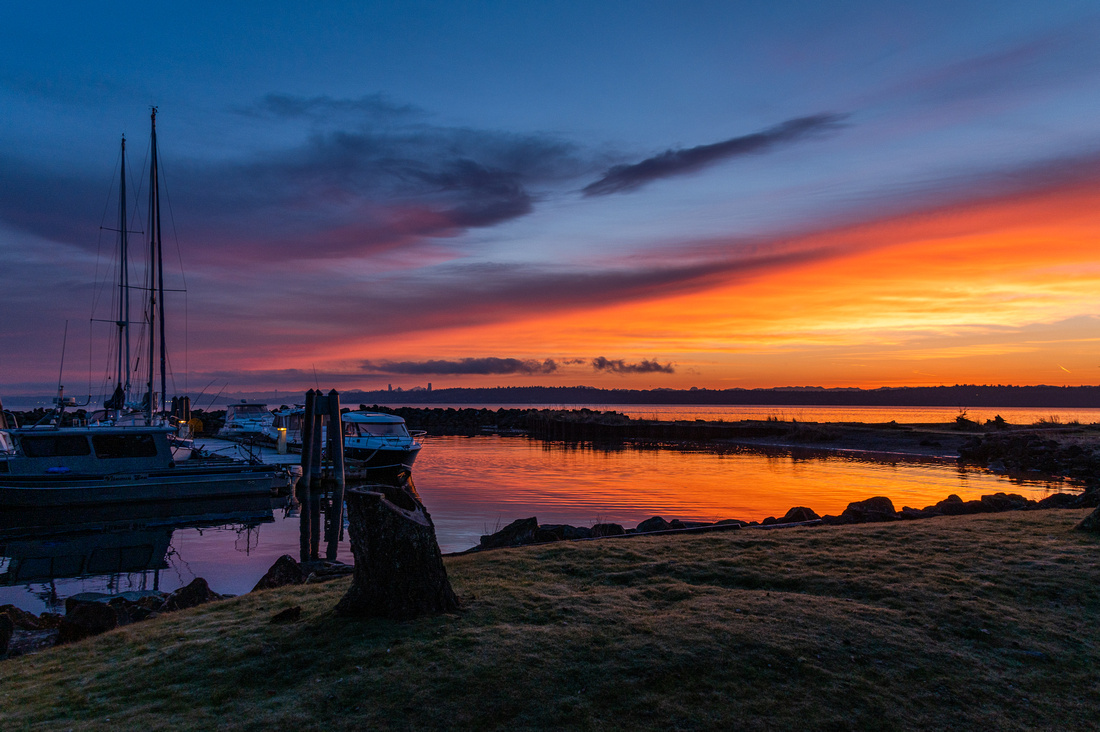 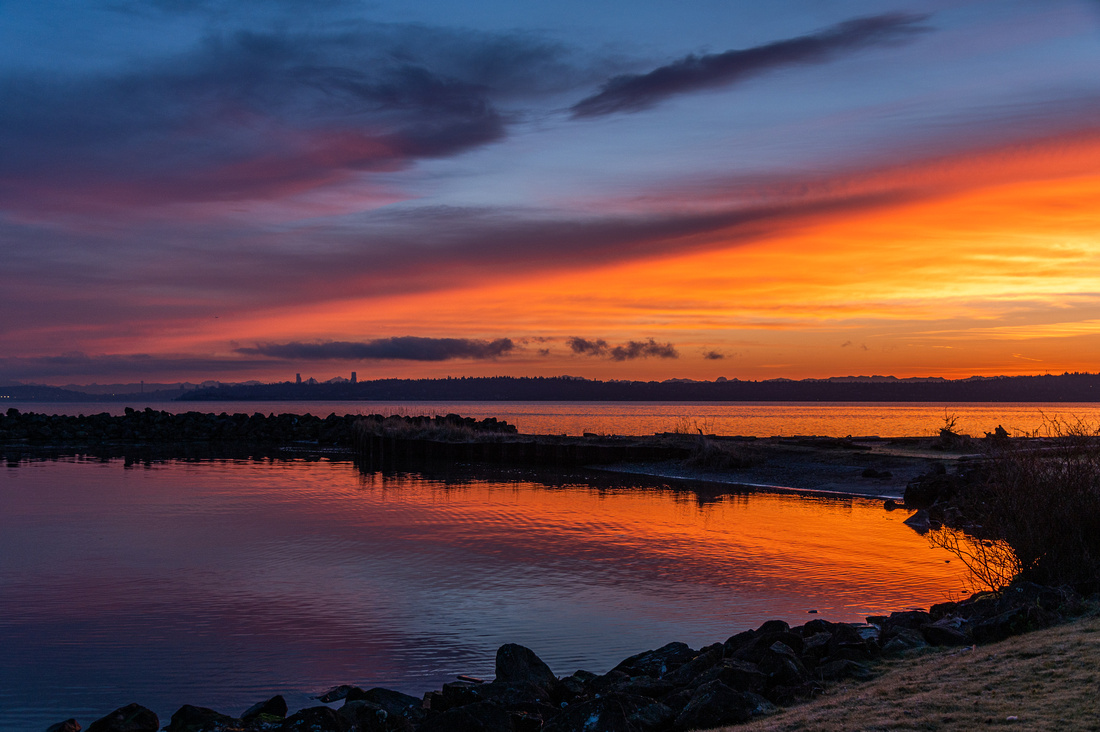 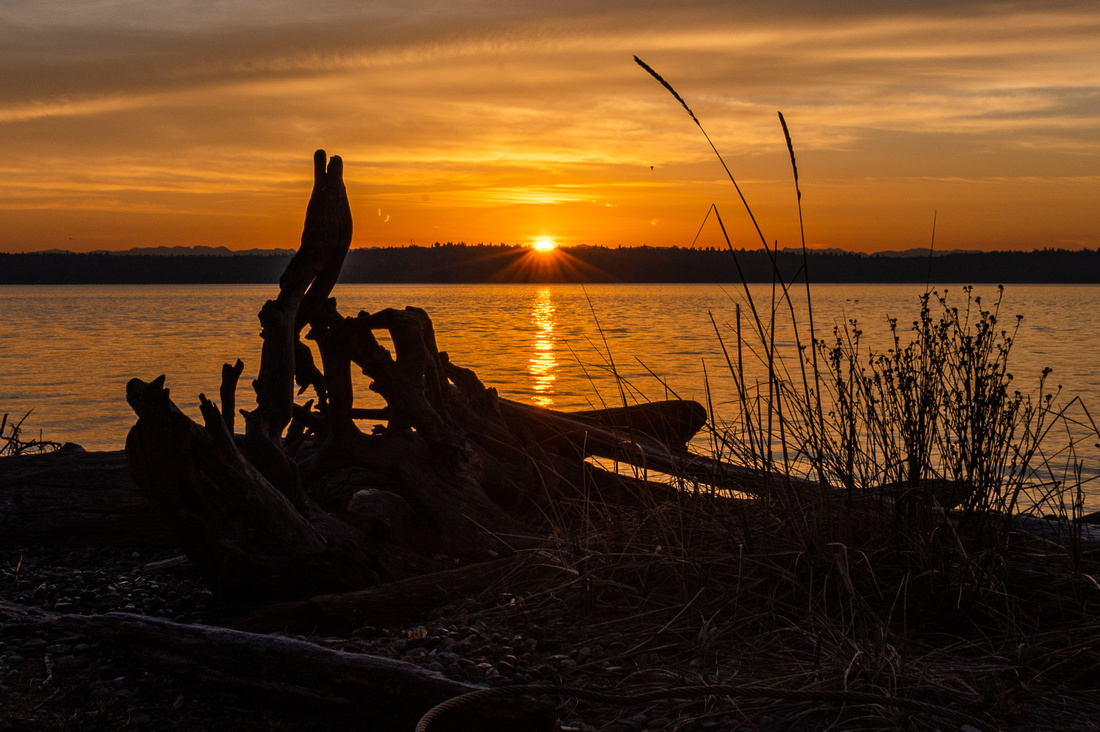 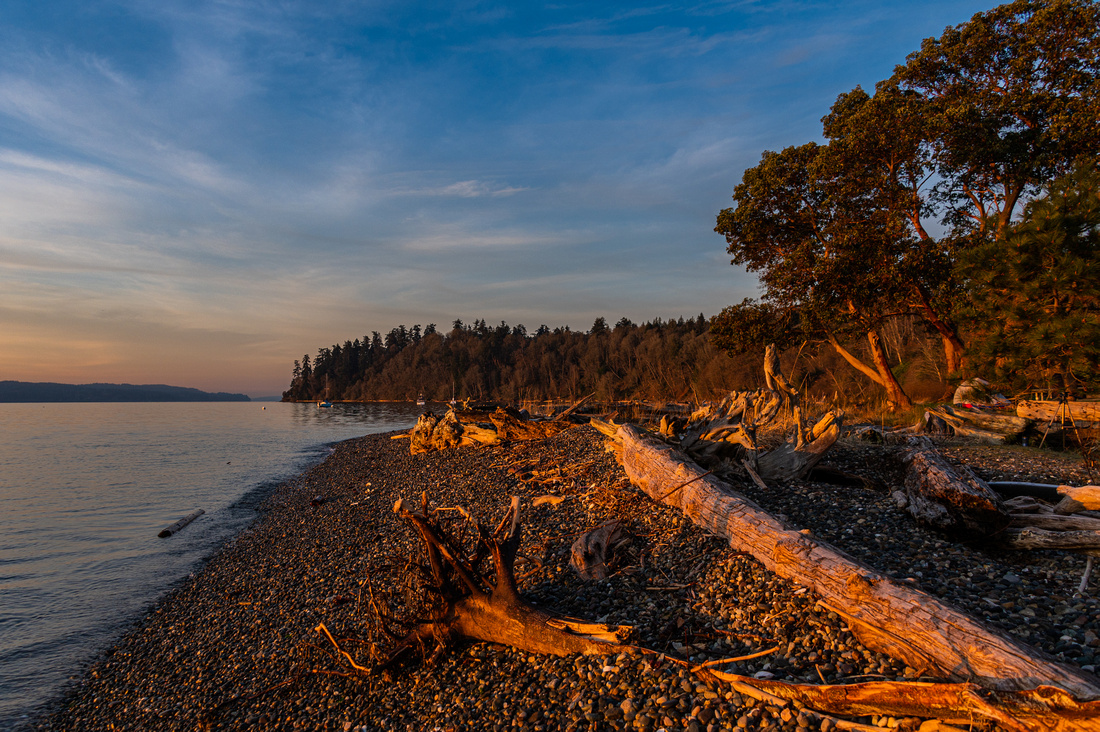 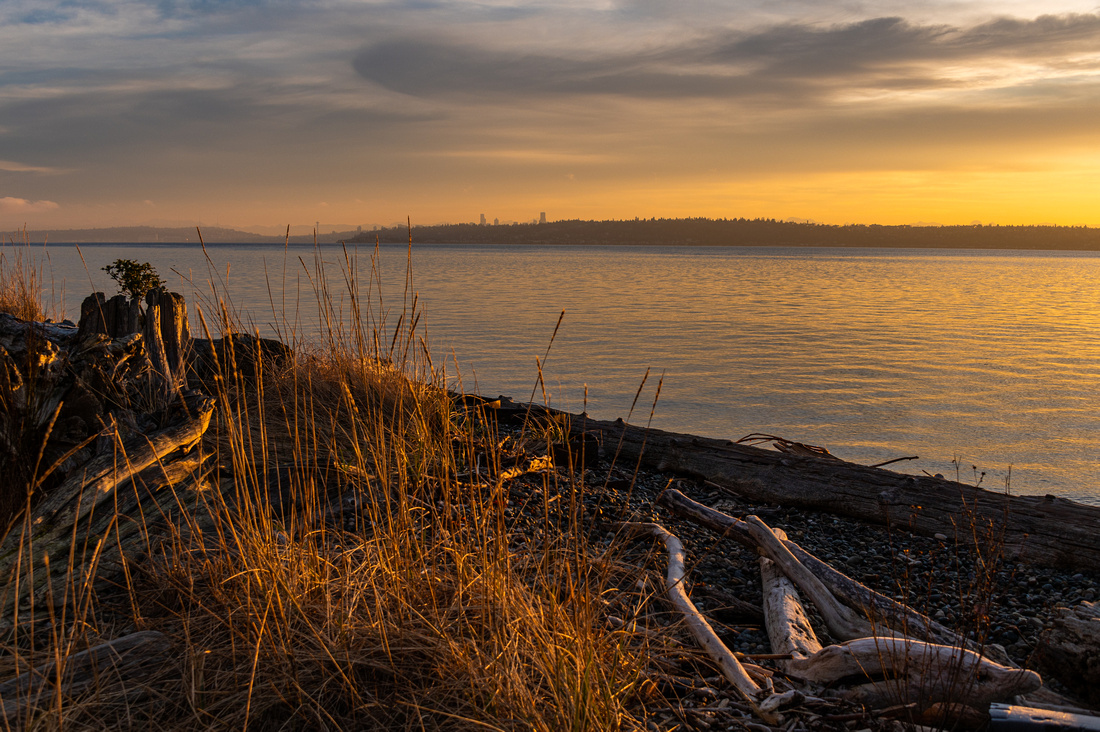 Hiking was on our list while at Blake. Eight miles to choose from, plus five miles of beach! We set out for a couple hours enjoying the beautifully maintained, but sometimes VERY muddy trails. Sunny skies, cool air and no wind made for a lovely hike.

Naps and rests on the deck, with the sun on our face, warmed us to our core. Lovely….

There was not the most spectacular of sunsets, but the blue hour was again, gorgeous. I decided to do some long exposure photography to capture the Seattle skyline, the Space Needle, the Sound, and the perfect blue that blanketed everything in sight. 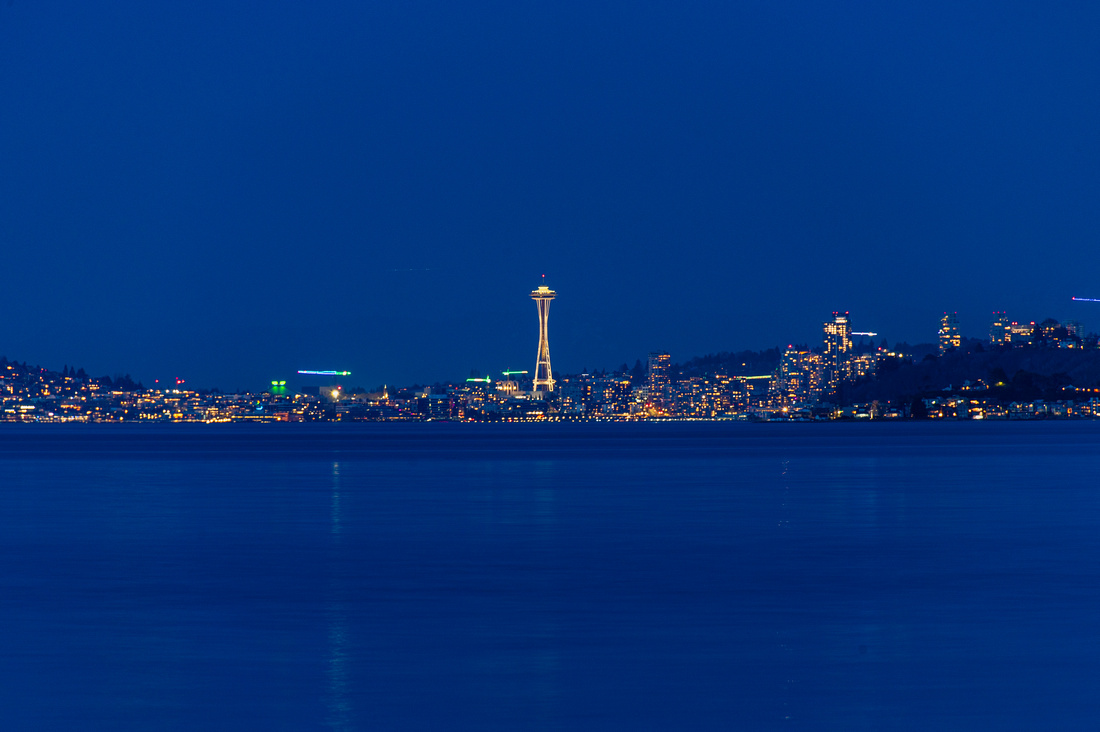 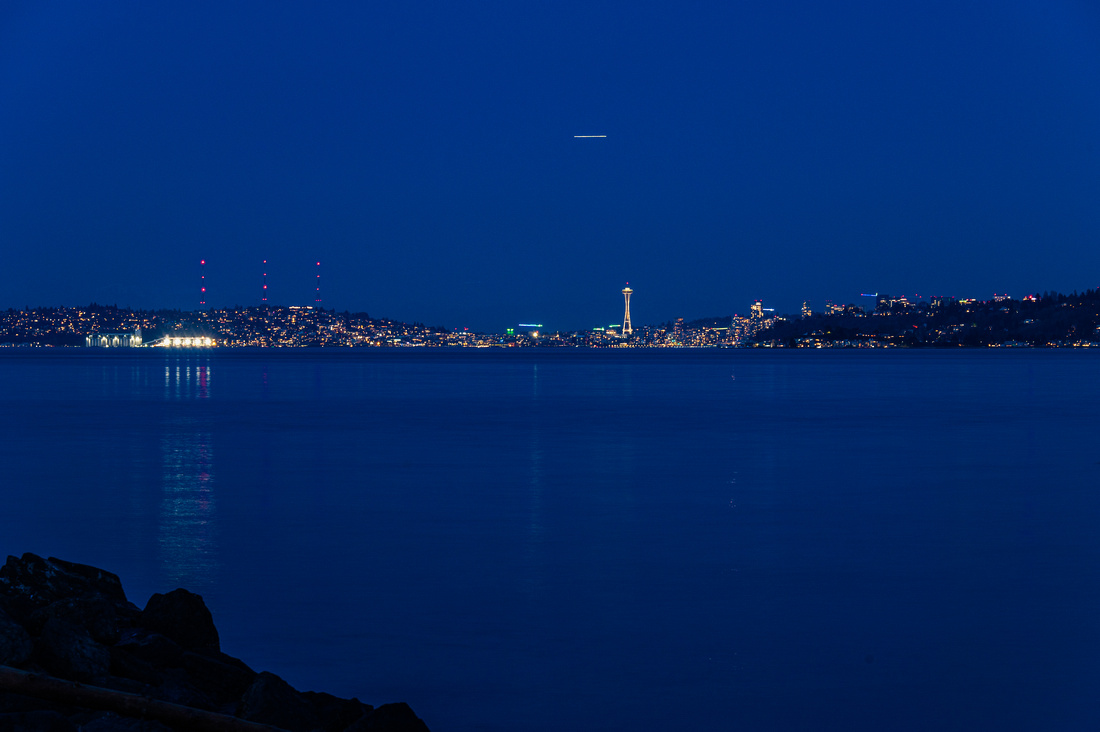 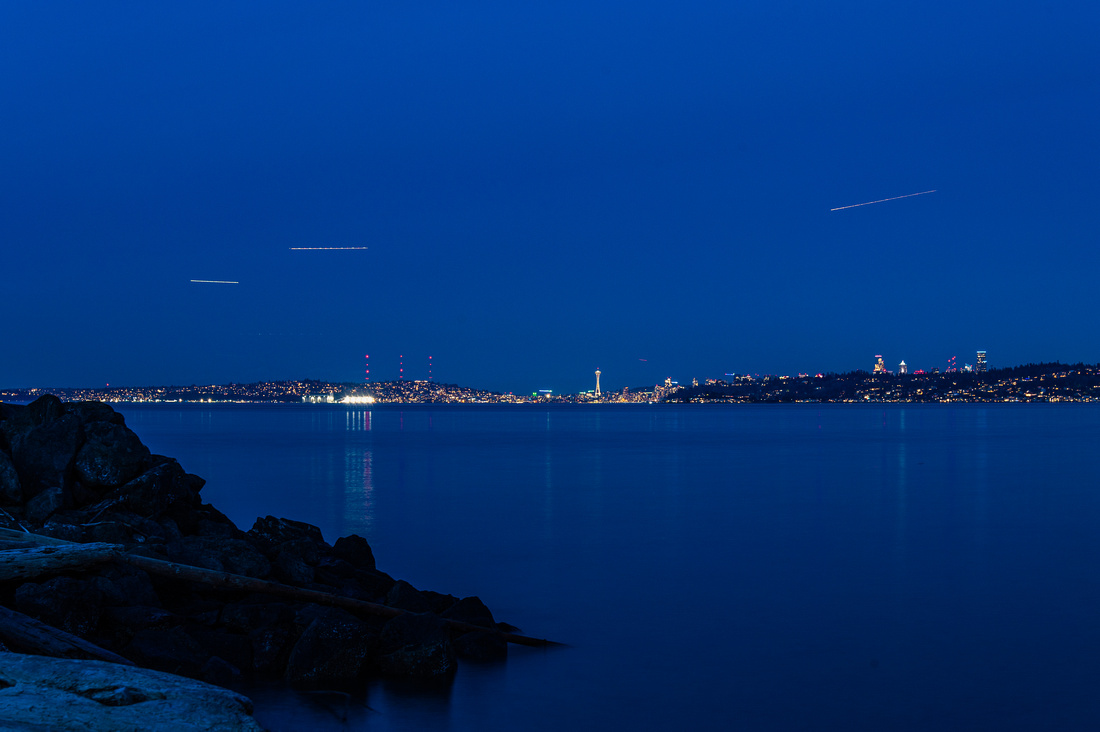 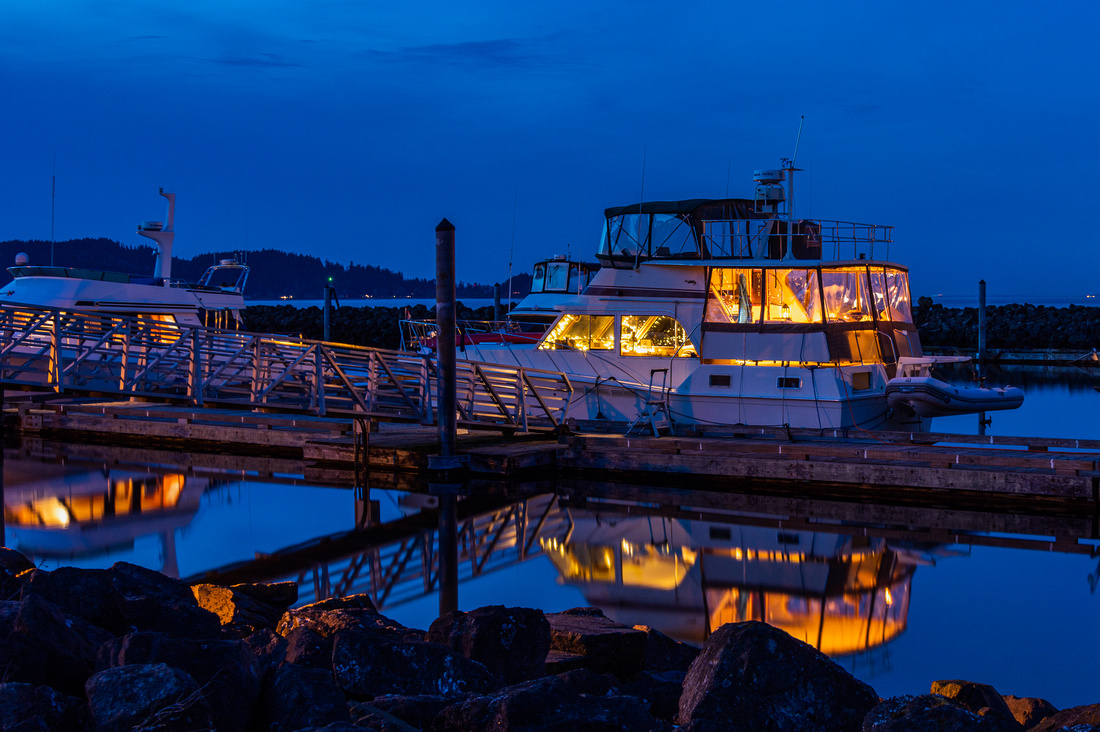 The racoons are often on the move in the evening, though during the day now, more and more, looking for free food! They will actually climb aboard boats to find food. The new folks to Blake might not know this yet and will often donate a loaf of bread or other treat to their newfound “friends”.

The docks had cleared earlier in the day, leaving about eight boats for Saturday night. The marina was much quitter than the active docks from the night before. We knew rain was coming on Sunday so we decided that writing, photo editing, planning and researching boat projects and of course naps would make for a great day while at Blake. We decided to stay until Monday!

I didn’t even set an alarm for sunrise, as I knew the rain was moving in, but WOW! Was I taken by surprise! Thankfully, it was daylight savings time that morning, so my body woke me up in plenty of time to see the sky filling with bright yellows, oranges, reds, and purples. I was in awe. What an amazing surprise for sure! Out I went for sunrise photos. There was no way I wasn’t capturing this! All of the campers were gone and no boaters were out yet, so I had the entire beach to myself. I watched Mount Rainer wake up and come alive. I watched the sun break above the Cascade Mountains and the Seattle hills. I saw the first, warm, morning light hit the amazing red barked madrone trees. Once again, I paused and said to myself, “We live in an amazing place!” 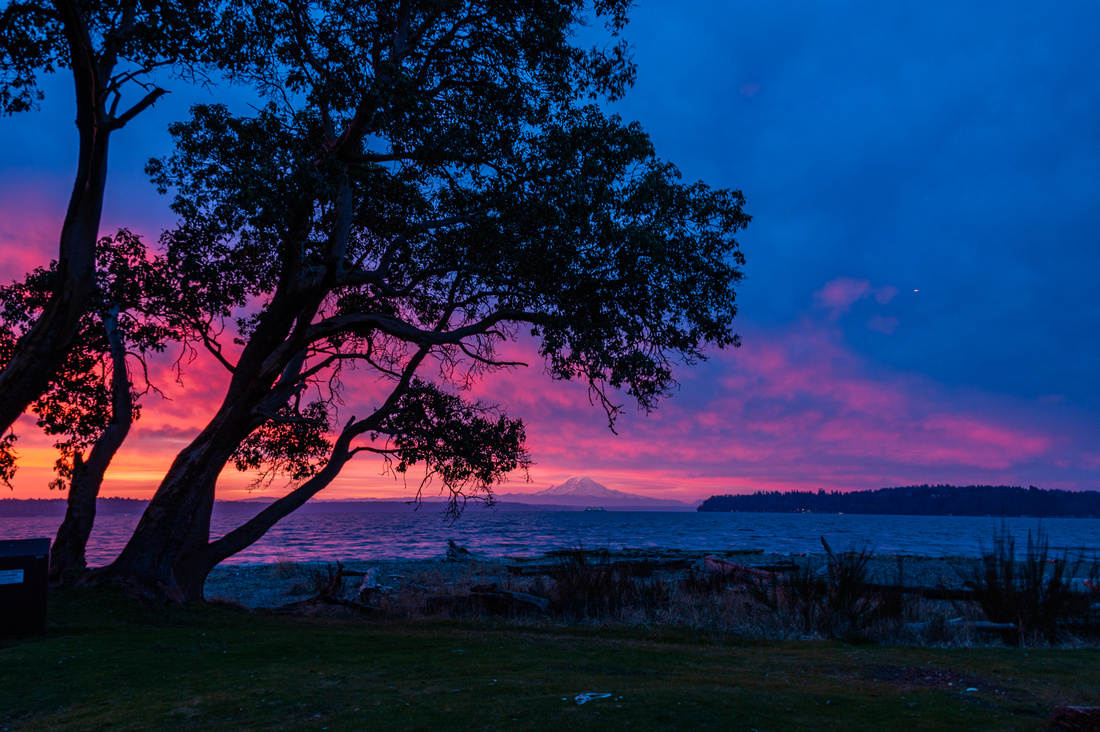 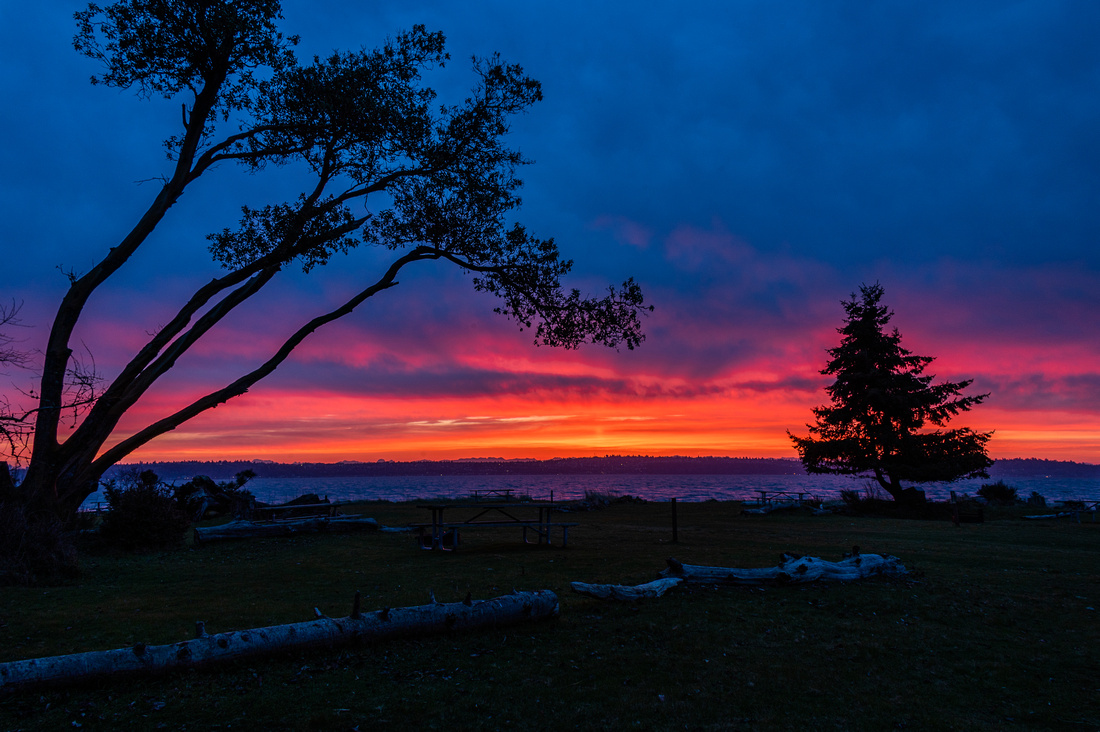 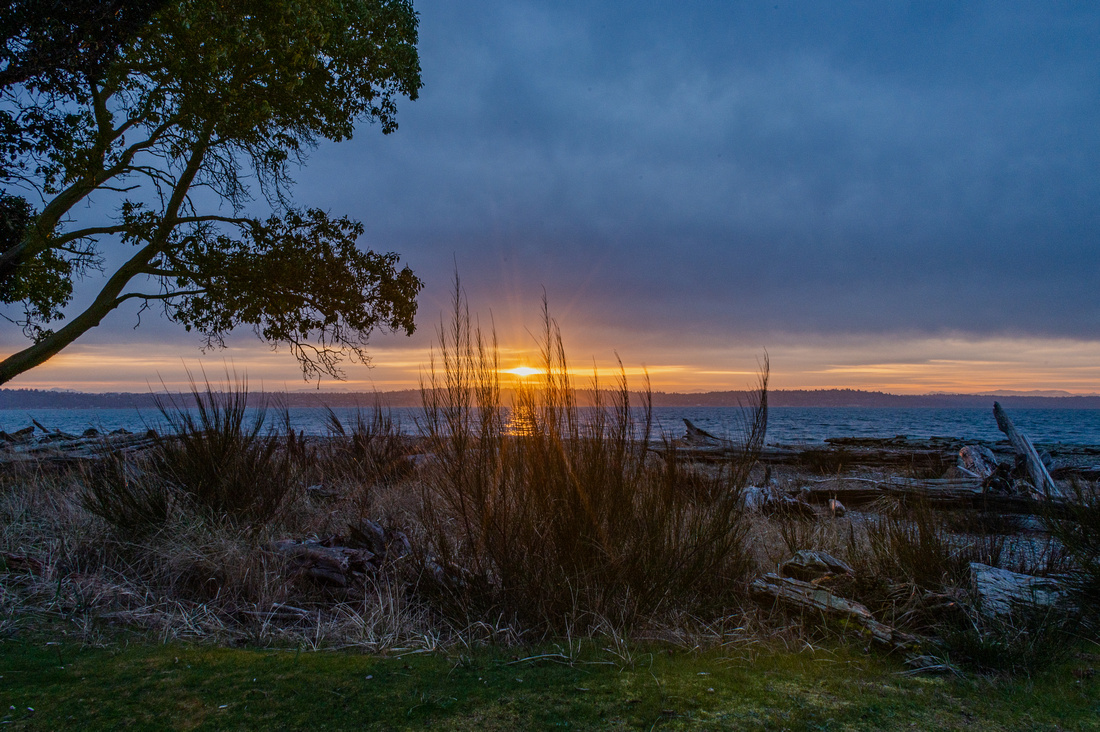 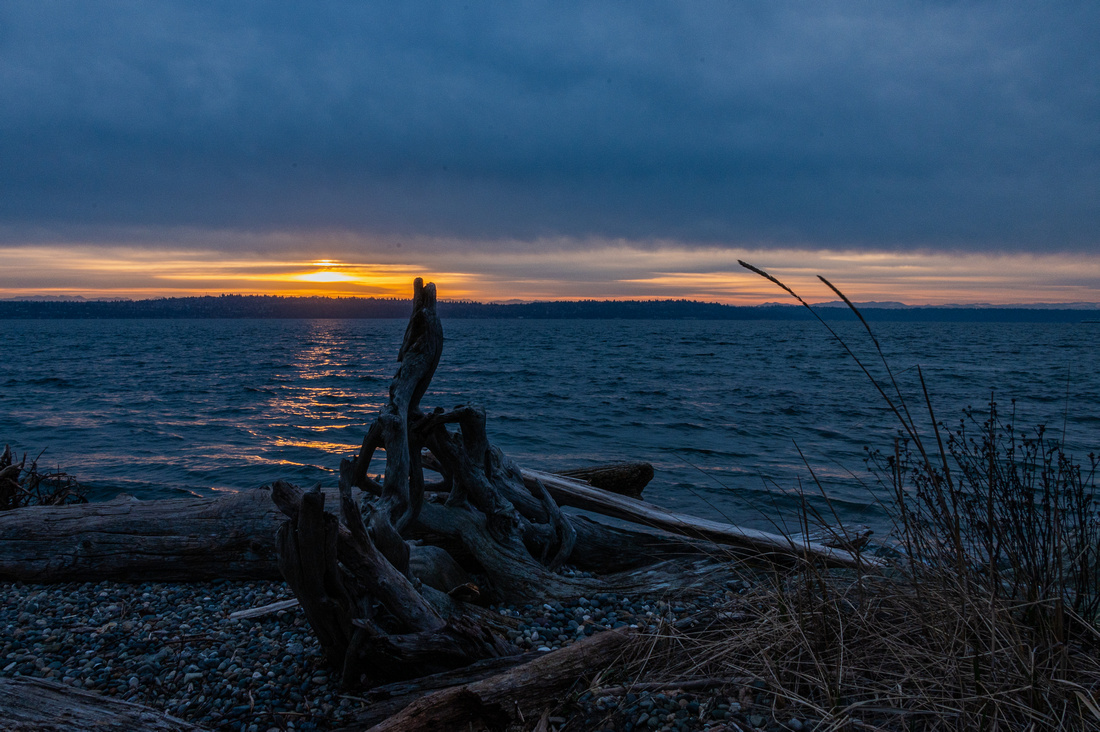 Minutes after I got back to the boat, the rains came as predicted. We never mind the rains (We do live in the PNW!) as they are so cleansing, and they also give us time to focus on maybe more pressing matters and chores as we are not itching to go play in the sun!

We had rain and high winds all day.

Monday morning, we were on our way home. We were going to take the long way home by going around Bainbridge Island to burn some fuel. (We need to do a repair on a tank and we need less fuel in that tank!) As we started around the island I asked, “Any reason we have to go home?” “Nope,” was the answer so we headed to Poulsbo for a night! We love Poulsbo! Great food, great beer, great coffee!

After we tied up and paid the guy at the port, who by the way, tried to get us to stay longer by enticing us with, “What is better than a bunch of drunk Vikings?” We headed into town to get some coffee at our favorite coffee shop, Hot Shots Java. We did a little browsing in a couple shops too. We walked up to the Red Western Brewery (our favorite in Poulsbo) and Johnny had a beer. They have a lovely outside seating area with heaters and an adorable fence, made from, yeah…cedar!

Johnny had a call to take back at the boat, so I stayed in town and did some shopping. This is not my norm, but I was looking for some writing journals that were “just the right size.” I was also on the lookout for a Birds of Puget Sound book. We see so many, I want to be able to identify them easily. I was thrilled to find both! Thankfully, Poulsbo has a couple of wonderful bookstores! (A Way With Words and Liberty Bay Books.)  I also found a sweet gift for a dear friend. It was a locally written book that seemed to be written about her!

We decided to get some dinner at the Brass Kraken Pub so we could sit outside and watch the sun lower in the sky. Our server was fantastic!

We were the only ones on the whole dock! It was pretty fun!

The next morning, we decided that yeah, we should probably actually go home and that is what we did. What a wonderful get-away. The Puget Sound is an awesome place to live!